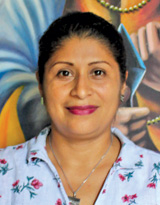 In March, the Center welcomed the new Integrity area psychologist – facilitator, Anielka Sáenz, for the second time. In 2010, Anielka was part of the Integrity team in the project: “Law, Affectivity, Equity and Respect for the Gender Based Violence Prevention” in the Jorge Dimitrov neighborhood, in Managua. When the project ended she developed workshops with the teachers at the Center on gender and human rights and how the teachers can apply these concepts to the classroom and their daily life.

Anielka never left the Center, and now that she is permanent staff she says that she has a lot to contribute and she wants to continue working with the Center’s target groups. Anielka told us that: “The Center is a place where you can acquire technical skills in an environment that offers safety & well-being; it is a space where you can achieve personal development through recognizing your rights and recognizing that as women we have a space and we can take up that space with our own resources.”

The current context of work with target groups in Nicaragua is a challenge due to the constant violations of human rights, but Anielka is sure that the respect and defense of those rights is fundamental, especially, “recognizing that children are also subjects of rights and as adults we must respect and protect them.”